Polypane 12 introduces our new command bar, that you can use to control any part of the app without leaving your keyboard. We also improved the reference image, color picker and screenshot features, added new accessibility checks and implemented support for proxies. Polypane 12 runs on the latest Chromium, version 108.

What's Polypane? Polypane is the web browser for ambitious developers. It's a stand-alone browser that shows sites in multiple fully synced panes and helps you make your site more responsive, more accessible and faster.

We've wanted to add a command bar for ages, so we're extremely happy to finally have one. It's built on cmdk where we've added our own improvements and contributed them back.

Whether it's adding panes, opening new URLs, navigating to specific panels or even quickly copying lorem ipsum, a UUID or your own IP address, or, uhm, shoot confetti.

There is a ton of stuff to explore in the new Command bar. Open it by pressing ⌘ k. Let us know what you think, and what more you want the command bar to do!

For the reference image we added a quick way to toggle the image on and off without needing to change its opacity, and a new overlay mode that doesn't invert colors.

Invert turns the image into a negative. When overlaying it on the website, everything that's the same cancels out to grey, and the differences are shown such that the website retains its original colors, and the image is inverted.

You can now set a delay before taking a screenshot, and add white-space around the image while editing so you have more space for annotations.

Before making a screenshot you can set a delay of 5 or 10 seconds. This lets you get the page in order by hovering, inspecting or clicking before the screenshot is actually taken.

During the delay a countdown timer is shown:

We like to use this to make screenshots of our node tooltips: set a delay, press ⌥ to inspect and all its info shows up right in the screenshot ready to be shared. Of course, it's useful for any hover-related or timing dependent UI!

We now support adding additional space around your image by zooming out in the crop feature of our screenshot editor.

This lets you add a border around your image where you can put annotations before saving and sending it to your colleagues or customers!

If you require a proxy to access pages and you can't set that at an operating system level, Polypane now supports configuring a proxy with all the options that Electron proxies have.

Easily get links to fragment identifiers

When right-clicking any element that has an id attribute, you can now copy the link to their fragment identifiers. Like copying regular links, you can copy the URL, or copy it as markdown. The markdown link will use the text inside the element as the name:

We found ourselves often wanting to link quickly to different sections of our docs and with this it's just a right-click and we're good to go.

Along with updates to the Slack and Discord previews made for Polypane 12, we now show the security.txt file when available.

Security.txt is a new standard, like robots.txt and humans.txt (which we also show) that lists information to allow security researchers to easily report security vulnerabilities. You can learn more about it at securitytxt.org 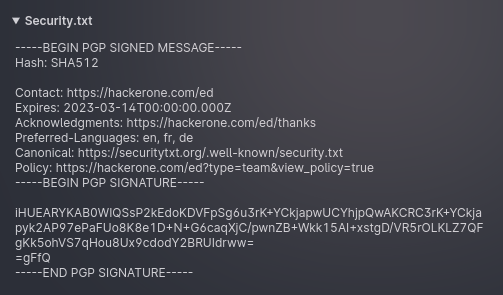 Thanks Paul for suggesting this feature!

We've added new functionality to the various lists in the outline panel, the biggest update being the Landmarks panel.

Up until Polypane 11, those not-landmark elements were simply not displayed in the landmark list. With Polypane 12, we're now showing those elements and explain why they're not landmarks. This helps you debug situations where you expect something to be in the landmarks structure but it isn't. 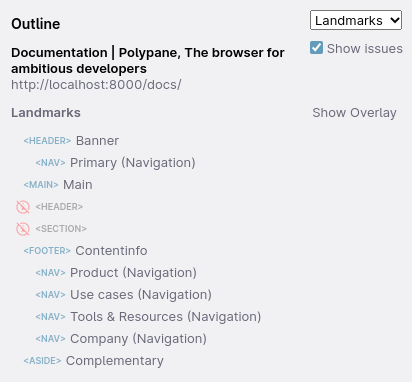 If you want to learn more about how these landmark rules work exactly, check out landmarks and where to put them, which Kilian recently wrote for the HTMHell advent calendar.

The src is a required attribute, so if an image element doesn't have one, it doesn't display an image right? Turns out we made the wrong assumption here, since if it does have an srcset for example, browsers will still find a way to show an image on screen. Browsers are such forgiving beasts.

So the Polypane outline panel now also happily displays these, albeit with a warning about that missing src attribute, since it's still required. Thanks Eric for helping us find this issue!

We improved the focus order in two ways: we now more accurately list all focusable elements, including links in summary elements (which themselves are focusable too) as well as iframes. This will make the list more accurate.

Secondly, we improved our algoritm to determine if elements had a logical focus order. Previously, it compared the center of two elements, but we now use the top left corner instead. The result is that Polypane is better at assessing what a "logical" focus order is.

For links, we now show the hreflang attribute value when available.

The color picker will now switch to a set of icons when you're testing for non-text contrast.

You can now switch between AA and AAA levels to determine if something has enough contrast or not. This paves the way for APCA to be included in the future.

Lastly, when exporting a color swatch screenshot, we now include the suggestion in the file name as well. 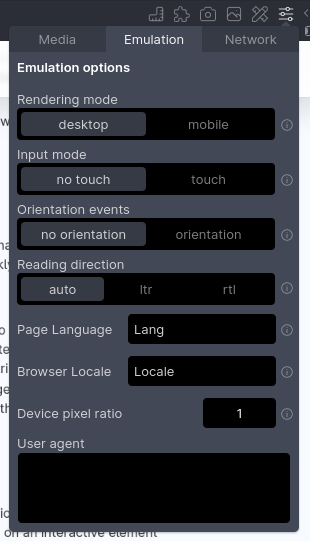 This is different from the browser locale that you can also set in the same popover. That's used to send along with the request headers and tells your JavaScript which languages the browser understands, while the lang attribute determines what language the page is written in. You can also find the page language in the meta panel under "language". Thanks to Daniel for suggesting this feature.

Polypane can now also sync "click outside" style interactions, where clicking outside an popup dismisses it. Because this click doesn't happen on an interactive element previous versions didn't sync it.

Hiding the main menu on Linux.

On Windows, the menu is integrated in the header and on macOS the menu sits at the top of the screen. On linux however, a native menu is rendered wherever the OS determines it should be.

If that happens to be at the top of the app (as opposed to in a global menu, which I recommend to everyone) that doesn't look great. So if you're on Linux you can now show and hide the menu with ⌥ m. Thanks Philipp for requesting this feature!

We now run on Chromium 108.0.5359.62 which supports new viewport size units (more on that in a future post). We've also enabled the flag that lets you use the new lh (for line-height) unit and Polypane can now animate grid-template.

Polypane is available for Windows, Mac and Linux (.deb or AppImage) in both 64 bit and ARM versions.

Bugfix to solve an issue with the Next.js devserver not loading a site properly.