In Polypane 6.3 we added new debug tools and improved the meta panel and outline panel. And we moved the reload button.

What's Polypane? Polypane is a web browser for developers, designers and anyone that works on web projects. It shows sites in multiple fully synced panes and has tons of features that help with responsive design, accessibility and overall site quality.

The new tunnel vision simulator will let you experience websites as if you had tunnel vision, with the mouse cursor position acting as your focus. Everything apart from a small area in the center of your vision will be obscured while the page itself remains fully interactive.

Tunnel vision can be caused by various diseases like glaucoma or pituitary tumors but also as a result of temporary impairments like alcohol consumption, migraines drugs, panic attacks, altitude sickness or poisoning, or even situational impairments like wearing safety goggles or helmets.

With such a wide range of causes, your site will certainly be used by people with tunnel vision (though we haven't been able to finds specific numbers on how common it is), so it's important that information can be found even when you can't see the entire page, and that related information is close to each other.

To make sure all the elements on your site are easily clickable or touchable, they should be at least 44 by 44 pixels and that area should not overlap with other clickable elements. The target size cursor debug tool replaces your cursor with a 44 by 44 pixel square so you can hover over elements and check if they have enough space around them. 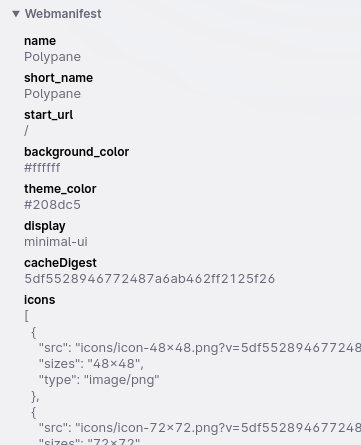 The Meta panel now shows the contents of a linked manifest file so you can easily verify its contents. Any theme color specified by it is added to the list of theme colors.

The reload button has been moved 😱

While we really liked the reload button in the address bar, it's more important to make the Polypane UI as easy to use as possible and sometimes that involves making sure it aligns with other browsers.

The Outline panel already warns you about many other issues as well, like missing alt attributes, links that don't use https, broken links, skipped heading levels and more. If you haven't opened it yet to inspect your pages, have a look!

We've updated the Discord and Slack previews to be in line with recent updates on those platforms (You need a keen eye to spot the differences, but they're there!), and have improved the resolution of relative opengraph image urls for all previews using them.

We've improved performance in a number of different areas of the application, most notably in opening and interacting with the panel and the elements panel in particular.

Starting in 6.3 Polypane detects when the body and not the html is the scroll container and uses that to sync the scroll position instead. This also works for the full height screenshots.

Polypane is available for Windows, Mac (with versions for Intel and M1) and Linux (.deb or AppImage).

Polypane automatically updates on Mac and Windows. Linux users need to download the new version from the download page. You can find the Mac and Windows versions on that page too.

6.3.1 adds the ability to set custom ignore patterns for live reload, a custom font size for live CSS, updates the Twitter and Google previews and fixes a number of bugs.

6.3.2 is a bugfix release with some dependency upgrades.