Polypane 8 comes with a better Elements inspector, big performance improvements, Chromium 98 and many other new and improved features, like forced colors emulation, focus state sync, ARM support, UI improvement, a new debug tool and all-in-all netting a changelog of over 100 items. Lets get into it.

The Polypane element inspector inspects elements across panes and lets you edit the same element in all panes at the same time, a unique and powerful feature built from scratch for Polypane.

This round, we focused on some of the most requested features, making the design easier to understand for people coming from other browsers and greatly improved the performance of the inspector as well.

We rewrote core parts of our element inspection logic, making selecting elements and changing styles over 60% faster compared to Polypane 7. This is a pretty major difference and it feels great. Especially considering we now surface more information than we ever did, more on that below.

To accommodate the new features and address some the issues people had with our Elements Panel we tweaked and improved the design. There are no major changes, but a lot of little tweaks to make it feel more familiar while also making room for new features. Have a look at the old and new design side by side: 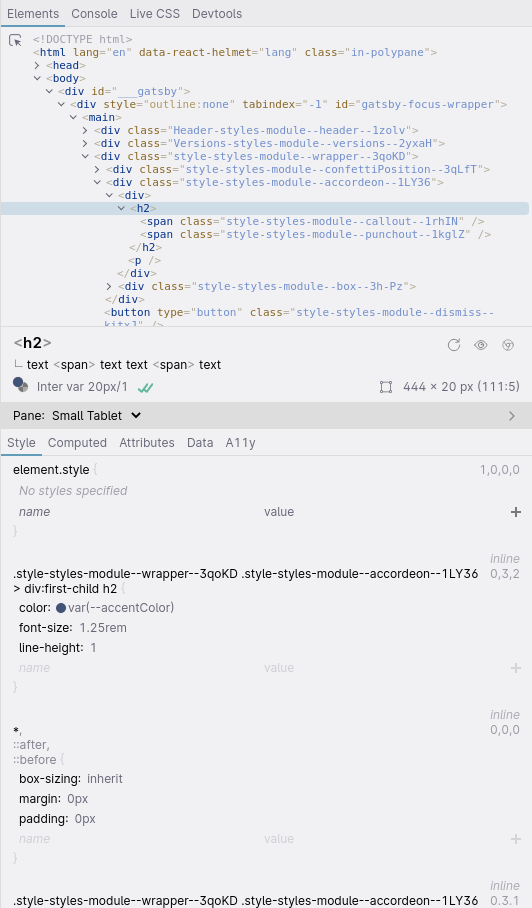 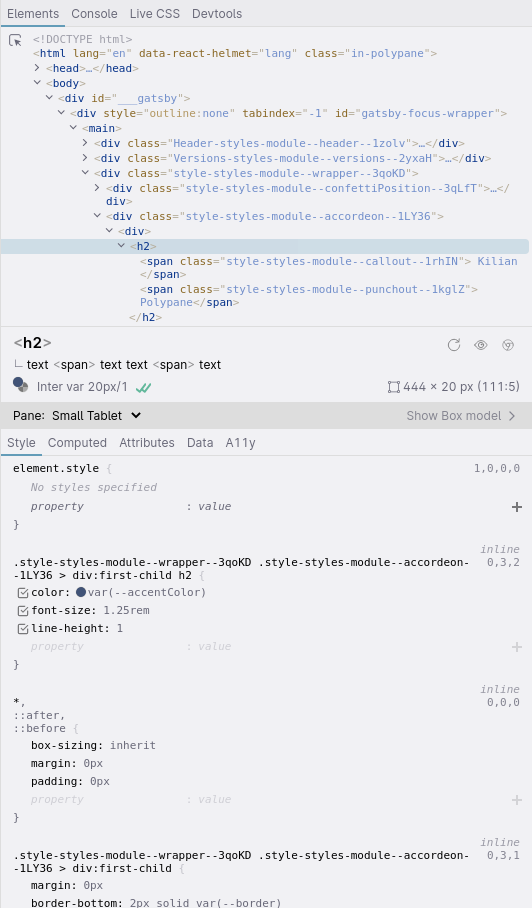 The Tree view is now styled similarly to the Chromium elements panel: collapsed elements are shown with ... instead of as opening tags and short content is shown inside the element. We hope this makes it easier for people to switch to the Polypane Element inspector.

For the navigator area, we tightened up the alignment and placement of icons, ids and classes, and we now collapse the box model by default so more space is visible for the Style tab. The button to toggle the box model now has text to make that clearer.

The biggest changes happened in the Style tab. We switched to a monospace font which allows us to show more code in the same area while bumping up the contrast of different components without making it feel too busy. A sharp eye will notice some new checkboxes as well…

Toggling individual styles on and off

Those checkboxes are for the most requested feature for the Elements inspector: the ability to toggle individual styles on and off. It was a huge undertaking, but it's here!

Toggling a style is quick and gives you feedback across all your panes. Styles that are toggled off are shown with a line-through so you can at a glance see which styles are enabled and disabled.

The Element inspector now has full support for displaying Cascade layers. They are set to ship as stable in the next release of Chromium while in Polypane you can use them already.

Instead of having just one way to overwrite the specificity, with !important, cascade layers lets you define separate layers for different parts of your CSS.

Each new layer overwrites the old one, making it easy to work with third party CSS and saving you from having to add more complex selectors just to be more specific. For an introduction to Cascade Layers, read the Cascade Layers article by Stephanie Eckles. 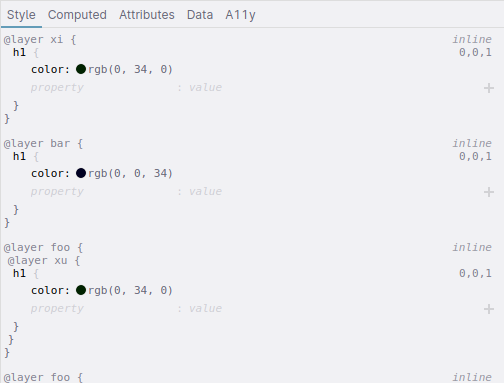 Work to support cascade layers is underway in all major browsers but it hasn't shipped yet (except in Safari's technology preview), meaning that Polypane is the first Chromium-based browser with devtools support for Cascade layers, and the second browser to ship it. How cool is that?

Like Cascade layers, container queries are an upcoming technology that Polypane has enabled. While the elements panel already showed @media queries, we updated our logic to show all at-rules, adding @supports and @container to the list, as well as the @layer mentioned above.

If there are nested at-rules the Elements inspector shows all of them so you can always see why something is applied.

A useful feature in Chromium devtools is you can press shift to inspect elements that have pointer-events:none applied to them. Now that feature is also available for the Polypane inspection tools, either from the inspect button or after pressing alt/option to use Polypane Peek.

We made more changes to the Element Inspector:

There's also a few bug fixes, you can find those in the full changelog.

With this release we set out to improve performance across the application. We wrote about the 60% performance improvement in the elements panel above, but we also made improvements to other parts of the app.

50% reduction in load time
By improving the order of things we do during launch we managed to improve startup time by 50%, and completely did away with the "loading Polypane" screen.

Faster refresh rate for scroll syncing
The scroll sync logic has now been updated to no longer need CSS updates on scroll, making it much smoother.

Website bottlenecks guards
While Polypane previously showed a warning for sites that had more than 10K CSS selectors, we now disable various features at 15K selectors. Polypane disables hover syncing, breakpoint detection and overflow detection to keep the rest of the UI performant. In future releases we might disable more features.

Preventing data-related performance issues
We also fixed several bottlenecks in the Polypane UI and parsing logic: The address bar could get slow because your history had too many matches, so we now limit the number of matches we show.

Faster Polypane Peek tooltip
Our tooltip was already fast but when improving our style inspection we found a potential slowdown for the tooltip, so we added that in. Enjoy the 4ms speedup!

You can now turn off individual syncing options, we stopped syncing form submissions and we can also sync Focus events.

Individual sync options
Right-click the sync button in the address bar to toggle individual syncing options. You can for example choose to sync hovering but not keypresses.

Focus sync
Normally, focus is only ever in a single place across your entire operating system. With Focus sync, each pane can retain their own focus, synced between panes.

Doing keyboard testing and seeing how Focus moves across the page on multiple panes is an extremely useful for those of you doing accessibility testing.

Focus sync is off by default. Turn it on by right-clicking the sync button in the address bar.

Preventing multiple form submissions
One thing that tripped people up is that forms would be submitted multiple times (once in every pane), which could trigger server issues. While not unsurprising (if you do the same action in multiple panes, you ...do the same action) it's most often not desirable.

Polypane 8 no longer syncs form submissions across panes. Note that you will need to use proper form semantics for Polypane to detect that a click or keypress triggers a submit action.

This is great because it means that to work on your Forced Colors design you:

By switching the prefers-color-scheme from light to dark, the forced colors design will be updated as well.

Along with updating the Elements panel we also did another round of improvements for the Console: fixing various bugs, improving rendering performance and adding some new features

It already supported log, warn, error, debug, info, dir and table. All console functions are now also available without typing console. in front of them.

New JSON renderer
We switched out our JSON/Object renderer for one that more closely resembles the JSON rendering of the Chromium devtools. 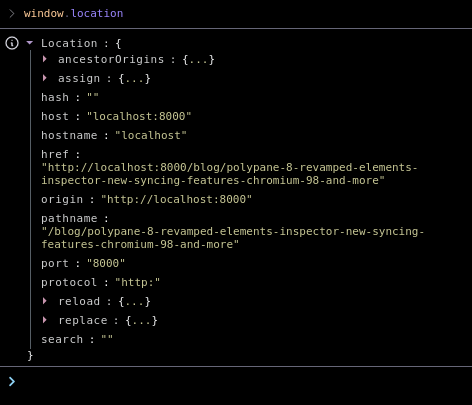 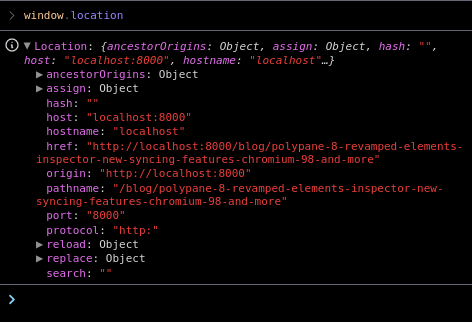 Our rulers and guides feature also got another round of improvements:

Previously the ruler features were fixed to the viewport, so if you scrolled the page they would not scroll along. In Polypane 8 they do, so the rulers, guides, rows and grid now scroll along with the page.

You can now change the color of the overlays to contrast with your site (or fit your mood):

Instead of grid lines you can now also set the grid to be shown as dots: 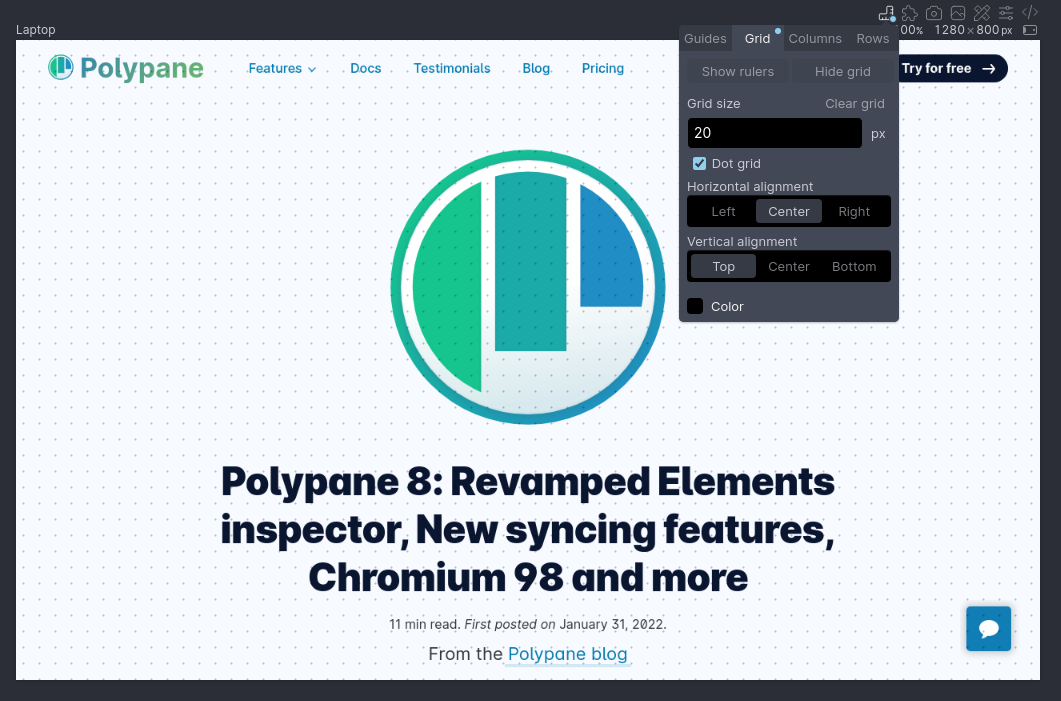 You can now add guides that are right-aligned by specifying them with a negative value. They will stay attached to the right side even when you resize the page.

Panel can now be left aligned

Speaking of alignment, you can now left-align the panel. Right-click the alignment button in the panel to set it to either right, bottom or left alignment: 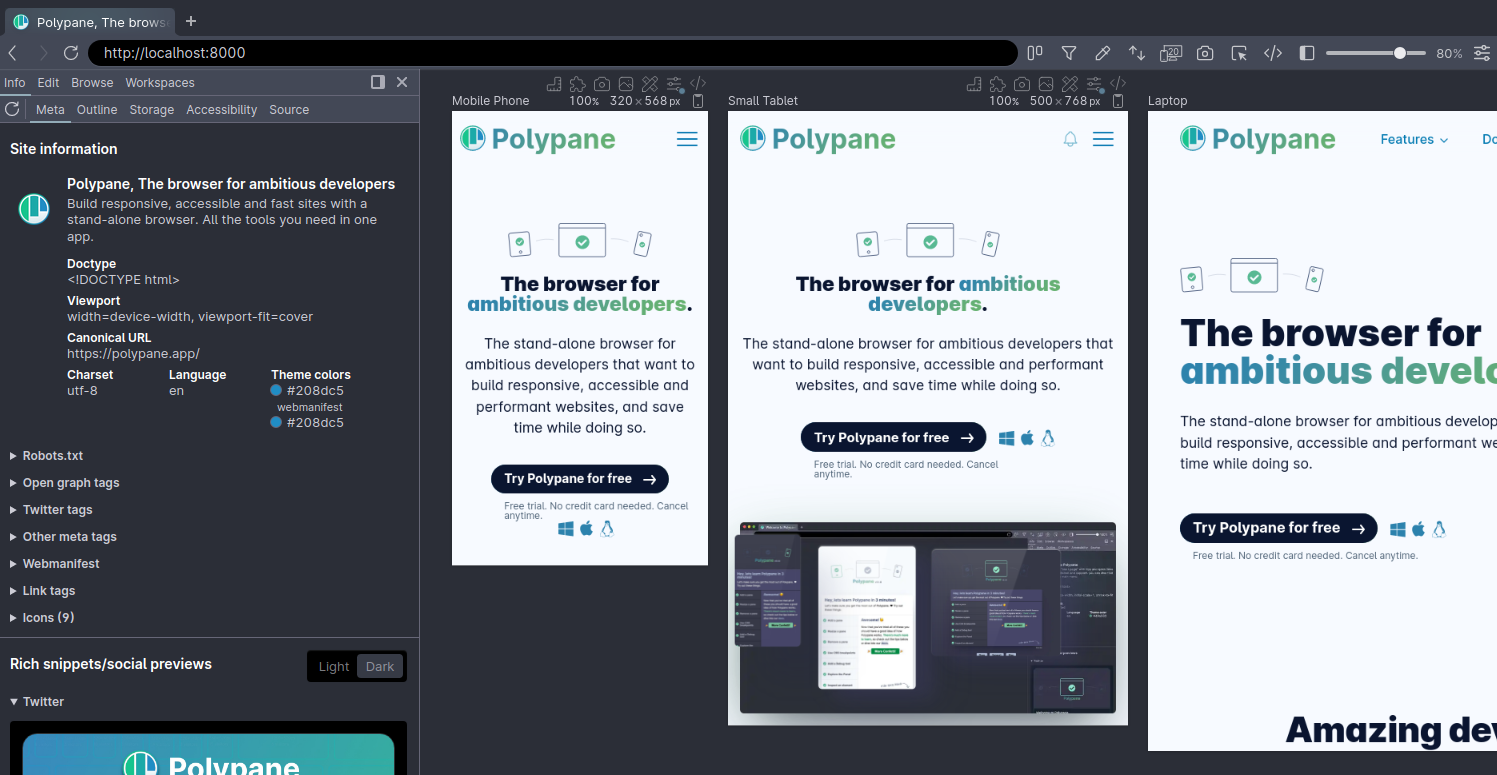 Measuring text contrast is complex and is influenced by a lot of different factors. Previously, we calculated the text and background colors of an element, taking opacity and all relevant parent background colors into account. This works well, but it's missing some factors.

In Polypane 8, we now improved the handling of opacity set on parent elements and added support for filter: opacity(), text-shadow and text-stroke, all of which combined provide a more realistic calculation of contrast.

The contrast checker in Polypane uses the WCAG2 algorithm. If you've heard about APCA recently as the new improved algorithm, it's important to keep in mind that, while very cool, it's not yet an official standard so can not be used to check compliance. Kilian wrote the article WCAG2 is what we have that explains why. In a future update of Polypane we will provide APCA and WCAG2 contrast logic side by side.

The meta panel now highlights the parts of your title or description that run over the recommended length.

In the past few months both Slack and Discord updated their rich previews (very subtly), so we've updated our previews to match their new designs.

No image for this one, but it's handy nonetheless. The Hide Cursor debug tool hides your mouse cursor. This way you can do a keyboard test and not be tempted to cheat.

When a site sets content-security-policy (CSP) headers it disables part of the functionality Polypane offers. While we had an option to disable CSP headers for a few versions now, Polypane now detects when CSP headers block functionality and shows a warning and option to turn them off.

Polypane now runs on Chromium 98. We always try to keep up with the latest version of Chromium to make sure you get to use the latest rendering engine, the latest security improvements and the latest new features.

Notable new experimental features are the selectmenu element and the ::spelling-error and ::grammar-error pseudo classes.

We've had an M1 version for Mac for quite a long time and now we also have ARM versions for Windows and Linux. So if you run on those architectures you can now use a more performant version of Polypane.

Windows now has a universal installer just like Mac, and for Linux you need to choose the appropriate architecture (The download page will automatically detect this for you).

If you want to get the ARM version now make sure to download the new version from the site, as Polypane will update to the same architecture it installed with.

Other improvements and bugfixes

As usual this release got a little out of hand, here are some other notable improvements and bugfixes that dont deserve their own heading but are still noteworthy. You can find the entire list in the changelog.

Polypane is available for Windows, Mac (universal dmg for Intel and M1) and Linux (.deb or AppImage) in both 64 bit and ARM versions.

In Polypane 7 we deprecated legacy mode. This feature is on track to be removed in Polypane 9.